I have gathered these retirement party jokes over many years.  I do not recall the source of each. Some I may have heard; some I may have read.  I likely have edited these and added my own touch.  If I have violated any copyright I apologize.  Just notify us immediately and any violating text will be removed. Here's a quick look at the guffaws coming up: 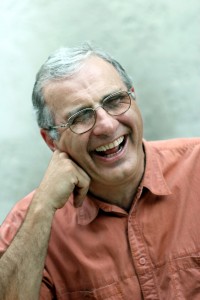 A man says to his wife, “It’s my sixty-fifth birthday today.

I’m going down to the Social Security office to apply for benefits.”

His wife says, “Take some form of identification like a driver's license or birth certificate.”

The man says, “I don’t need any of that stuff. See you later.” He comes back several hours later.

His wife says, “So, what happened?”

The man says, “What do you mean ‘what happened?’ I went and got my Social Security.”

The wife says, “How did you get Social Security without proving your age?”

The man says, “Well, I went up to the young lady and unbuttoned my shirt and showed her my white chest hair, and she gave me my Social Security.”

Wife says excitedly, “Well, you old coot, while you were there you should have dropped your drawers and applied for total disability!”

A retired man went to the doctor for his physical. Doc says, “Mr. Johnson, you are in great shape for a man of retirement age.”

Mr. Johnson replies, “How old do you think I am?”

“Wow!” says the Doc.” Your father must have been very old when he died.”

“What makes you think that he’s dead?”

“He’s not?” said the doctor, surprised.

“WOW!” says the doctor again. Then your grandfather must have been veryold when he died.”

“What makes you think that heis dead?”

“He’s not?!” replied the astounded doctor.

“Heck no, he’s 125 years old, very healthy and, in fact, he will be moving into a new house next weekend.”

“Why would he move now?” said the startled doctor.

“Well,” said Mr. Johnson, “His parents finally decided that he had to get his own place.” 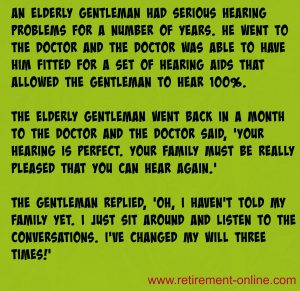 A retired teacher went to her priest for confession about the lifestyle she was leading since retirement.  Here’s what she told him:

I am so worked up and distraught about my lifestyle. I’m seeing five different gentlemen every day:

When I get up in the morning, Will Power gets me out of bed. Then I immediately go see John. A few minutes later, Charley Horse comes along. When he leaves, Arthur Itis shows up and, finally, I’m so tired, I go to bed with Ben Gay.

Do you think the Lord will forgive me?

The priest told her to stop seeing all 5 of these men and immediately go home and crawl into bed with Ty Lenol.

Exercise is critical for retirees.

In fact, It is well-documented that for every minute you exercise, you add one minute to your life. This enables you, at 85 years old, to spend an additional five months in a nursing home at $10,000 per month.

A woman about to retire walks into her stockbroker's office with her brokerage statement in hand. She asks, “Is this stock you recommended ever going to come back?”

“Absolutely,” her broker says, “the company has great earnings and a fine management team.”

“Is it going to come back in my lifetime?” she asks.

“Well, frankly", the broker sniffs, "I wish you were a lot younger.”

Many people ask me “How do you live in an area with so many retirees—they are such bad drivers!”

“The problem is not the bad driving of retirees, but that of their parents!”

So, they had a retirement banquet catered and hired a gorgeous woman to serve his every desire.

The beautiful gal saunters up to the old man and asks, “Would you like super sex?”

Herman retired and soon after, his wife noticed that his mental acuity was going downhill. She became very concerned when he went out alone, especially when driving.

One day Herman is alone in the car driving down the freeway, and Herman’s car phone rang.

Answering, he heard his wife’s voice urgently warning him, “Herman, I just heard on the news that there’s a car going the wrong way on Highway 280. Please be careful!”

A retired gentleman returns home from golf. He’s been concerned about his wife losing her hearing, so he decides to test it.

From the living room, he hollers to her in the kitchen,

“Honey, what’s for dinner?” No reply.

He moves closer, into the dining room and again says a little louder, “Honey, what’s for dinner?” Again, no reply.

So he walks into the kitchen and stands three feet behind his wife and repeats, “Honey, what’s for dinner?”

She turns around with a perturbed look on her face, “Harry, for the third time, roast beef and mashed potatoes!”

One more of our retirement party jokes about hearing - a favorite topic for ribbing retirees:

Three retirees, each with a hearing loss, were taking a walk on one fine March day.

One remarked to the other, “Windy, ain’t it?”

My grandfather got a new hearing aid last week and he showed it to me. I asked, “What kind is it?”

He answered, “A quarter ‘til three.”

A retired fellow had been feeling sluggish ever since his retirement. He went to the doctor who told him that he had a bad illness and only one year to live.

So, he decided to talk to his pastor. After the man explained his situation, he asked his pastor if there was anything he could do.

“What you should do is go out and buy a late ’70s or early ’80s model Dodge diesel pickup,” said the pastor. “Then go get married to the ugliest woman you can find, and buy yourself an old trailer house in the panhandle of Oklahoma.”

The fellow asked, “Will this help me live longer?”

“No,” said the pastor, “but it will make what time you do have, seem like forever.”

I recently received a phone call from one of my retired friends who I had not heard from in quite a while, a man who’s in his late 80s.

Just into the conversation, I said, “So, what’s new?”

He said, “Actually, I just got married!”

I said, “That’s great! Congratulations, you sly fox. So tell me about her, is she a great cook, or what?”

I said, “Okay, well, that’s not important, you’ve got lots of great places to eat near you. Well, she must be a real cutie pie, huh?”

He said, “No, actually, that’s not one of her strong points, either.”

So I said, “I’ll bet she’s a real romantic type, lots of hugs and kisses, eh?” Again, he said, “No, she’s not particularly affectionate, my friend.”

At that point, I had to say, “Hold on! We’ve known each other for a really long time, and now you get married. You tell me your wife can’t cook, she’s not much of a looker, and she’s basically kind of a cold fish! Why in the world did you marry her?”

He was quiet for a minute, and then he said, “Frankly, out of all the people my age around me, she’s the only one who has her driver’s license!”

A Good Sense of Humor

The retired attorney, who resides in a very beautiful neighborhood, was out on his front lawn gardening.

A brand new, shiny Mercedes pulls up. A well-dressed, well-to-do looking woman steps out and says to the attorney, “This garden is absolutely beautiful. How much do you charge?”

“Nothing,” replies the attorney. “The woman in the house lets me sleep with her.”

You know you are a retiree when ...

You and your teeth don't sleep together.

You try to straighten out the wrinkles in your shirt and discover you aren't wearing any.

It takes two tries to get up from the couch.

Your idea of a night out is sitting on the patio.

You step off a curb and look down one more time to make sure the street is still there.

Getting "lucky" means you remember where you left your car in the car park.

Everything hurts, and what doesn't hurt; doesn't work.

You sink your teeth into a steak and they stay there.

You wonder how you could be over the hill when you don't even remember being on top of it.

You have more hair in your ears and nose than on your head.

This One's For the Business Owner

A SOON TO RETIRE BUSINESSOWNER  told his son-in-law to be:

“I love my daughter, and now I welcome you into the family,” said the man. “To show you how much we care for you, I’m making you a 50-50 partner in my business with the intention that you take over the business when I retire. All you have to do is go to the factory every day and learn the operations.”

The son-in-law interrupted, “I hate factories. I can’t stand the noise.”

“I see.” replied the father-in-law. “Well, then, you’ll work in the office and take charge of the administration.”

“I hate office work,” said the son-on-law. “I can’t stand being stuck behind a desk all day.”

“Wait a minute,” said the father-in-law. “I just made you half-owner of a moneymaking organization with the prospect of having the whole business upon my retirement, but you don’t like factories and won’t work in an office.

What am I going to do with you?”

While these retirement party jokes are enough to get you going, you could be looking for more humorous quotes, short jokes, sayings, and maybe, the funniest of one-liners. In fact, such quips make the best of quotations to include into the retirement speech. Add them and you can have even the most emotional of guests roaring with laughter. The best place to browse for ideas is the internet and you'll find plenty of jokes about typical senior moments that are perfect for the sendoff do.

Many websites like Pinterest, UniJokes, and others have a large series of unique posters and pictures with humor woven into the warm retirement wishes. Of course, you can choose X-rated humor depending on the type of crowd you'll be talking to. But, if you have kids in the audience, you might want to stick to clean humor.

Make sure to preserve the happy moments where your guests are enjoying the retirement party jokes with fast loading software like Photobucket. The retiree is likely to play back the videos you make in the privacy of his home many years down the line and enjoy those fun moments all over again.

The Perfect Accompaniment for You Funny Retirement Jokes - Awesome Gifts!

Having set the mood for fun and enjoyment at the party, you'll want to sign off by presenting a selection of mementos that your retiring colleague will cherish for the rest of his life. If you're not quite sure where to begin looking for the perfect gift, check out the video above. It will give you directions to our website where we have put together a bunch of retirement gifts for both men and women. The video will explain how to choose the gift and match it with the personality of the recipient. Remember, you can always combine these gifts with retirement greeting cards that you can also find on the net. You can have the retirement party jokes inscribed or handwritten in them so your retiring friend can continue to enjoy them long after the party.