Is early retirement possible with a slow-growth economy and average worker salaries that have not kept pace with living costs? Since 2000, the Americans' standard of living has declined. 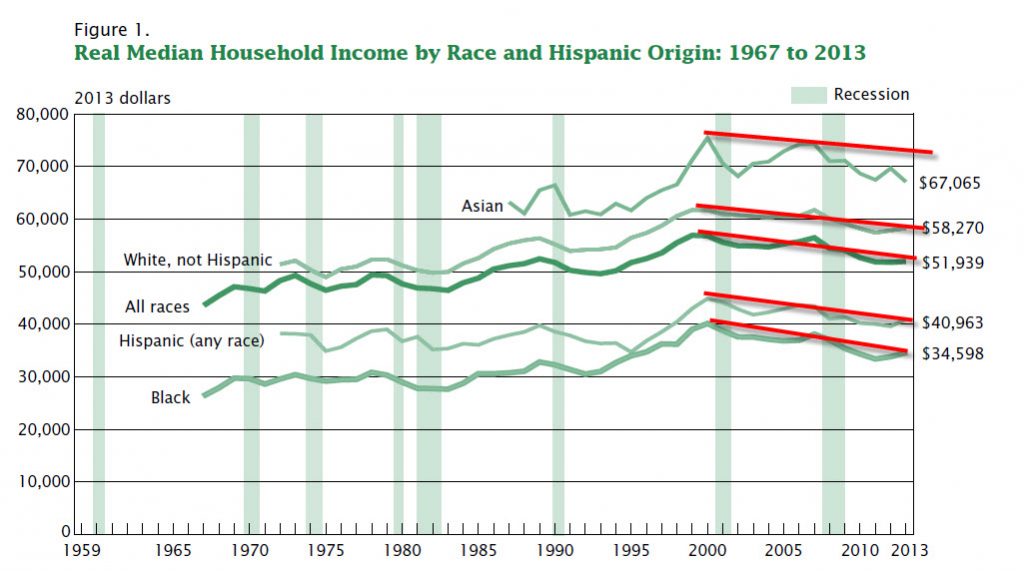 In light of a decline standard of living, it may seem crazy to discuss early retirement.  But it is still possible and you don’t need to be rich.  I will show you how people of modest means do it without an inheritance from Aunt Margaret.

I’ll explain how retiring early is possible and share a few stories of those that have done so.  This post is not about using a retirement calculator.  Rather, it is about a mindset or orientation that early retirees have in common.

Before you consider developing the process for early retirement, know that you may need a different community of friends. If your friends seek out Michelin three-star restaurants and salivate at buying a six-figure Tesla, these are friends you will need to abandon.   It is impossible to have financial standards which lead to early retirement if you do not insulate yourself from consumption-crazed Americans.

Is early retirement a good idea for you emotionally?  Only you can decide but the characters in these stories are all glad they had the opportunity. 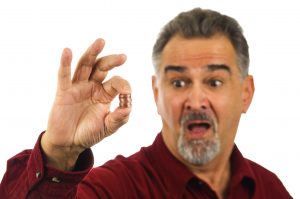 Here’s a simple case.  I live in the very high-cost San Francisco Bay area.  My modest home has a value of $1.5 million.  I could move to Mexico and purchase an equally nice home for $300,000.  I could then invest the $1.2 million difference and from that, earn $100,000 a year and live quite comfortably (more about ways to earn 8% fixed rate here).

Of course, there are trade-offs.  If I move abroad, I must give up Medicare coverage when living outside of the US.  I need to find my own health care coverage.  I need to adjust to a new culture.  Of course, I can pursue the alternative strategy by moving to a low-cost area such as Texas, Louisiana or Alabama.  I could replace my home in a similar neighborhood for $500,000 and avoid the trade-offs of moving abroad.

The point is that I currently choose to live in a high cost area and that is a cost I can control. My "overspending" on housing is voluntary and not a necessity.

Even more powerful, for younger readers, is to live frugally from the start of your career.  For example:

“The man is richest whose pleasures are the cheapest.”   —Henry David Thoreau

A blogger named Mr. Money Mustache found that by living frugally and sensibly, he and his wife were able to retire in their 30's and both had earned only modest salaries.  Most stories of people who retire early are people who live well below their incomes, in some cases, saving more than 50% of their income. Yes, they used retirement calculators when young to set their objective but most importantly, they developed the right habits and orientation to spending.

Let me share with you a few paths that others have walked to enjoy early retirement.  I am going to leave out the stores of people who earned $500,000 annually in their job, those who inherited money and those who sold a business. Those stories are the exceptions and I want to share with you the stories of “regular folks.”

Retire at 39 by Acting Early

Jeremy Jacobsen retired at 39. He decided in his 20's that financial independence was his goal, as quickly as possible. He and his wife saved between 50% and 70% of their income for a ten years.

Jeremy calculated that the 4% rule was fine for his retirement planning. To minimize housing expenses and taxes, he and his wife choose to live in Washington State (no state income tax - a significant benefit). Jacobsen says the couple’s retirement lifestyle requires about $850,000 invested. Currently, his financial plan requires that they live on 4% of that, a bit less than $36,000 annually.

It’s a tall order for most 39-year-olds to accumulate $850,000 in savings but not impossible. I have neighbors to my left in their early 30’s and their home cost $2 million. They have good jobs but like many people their age, they spend more than necessary. Early retirement requires some sacrifice like living in a modest home.

Similarly, the neighbors to my right also paid $2 million for their home.  They are young doctors in their 30's.  Clearly, they enjoy their money today and will not be candidates for early retirement.

Retire Early by Learning Something New

Billy and Akaisha Kaderli owned a small 43-seat restaurant and retired at age 38. There is no way to retire this early from the earnings of a small restaurant. 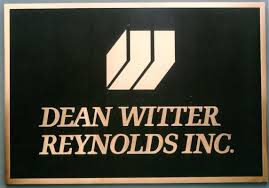 Something unexpected happened.  Five years after buying the restaurant, Dean Witter (since merged into Morgan Stanley) recruited Billy to become a financial advisor. What did he know about financial advising?  Nothing.

Billy was successful and eventually became branch manager of a local Dean Witter office.  While this was over 25 years ago, branch managers at major brokerage firms earn from $300,000 - $800,000 annually. Remember that Billy knew nothing about this business.  His only “asset” was the confidence to learn something new.

At the age of 38, the Kaderlis retired and moved to Nevis, a 36 square mile dot of land in the West Indies. Now they travel extensively through the West Indies, Venezuela, US, Canada, Mexico, Central America and many nations in Asia. Not a bad life.

You have read many accounts of people born in poverty that become rich successes. You may recall the movie “Pursuit of Happyness.”  It’s a true story in which Will Smith plays the part of Chris Gardner." Chris goes from homeless to multi-millionaire.  How?  He knew nothing about being a stockbroker or about financial sales.  Moreover, he’s an African-American breaking into what was a “white man’s game” in those days. He had nothing more than the confidence that he could learn something new and excel.  Most people do not have that asset, although it can be developed.  It is an asset that creates early retirement for many as it did for the Kaderlis.

In 1988, I read the book Cashing In On the American Dream: How to Retire at 35  by Paul Terhorst.  He was at the forefront of the “early retirement movement.”  Paul did well financially as he was a partner at a major accounting firm.  But I recall at the time thinking that his plan seemed risky.  He had $500,000 , all invested in bank CDs at 8%.  My thought was that his nest egg would need to last a VERY long time and that the 8% on risk-free investments might not last.

How have the Terhorsts done?  Have they survived with interest rates falling to 2% on CDs?  In fact, the insured CD strategy did not work and they had to switch to stock investing using a buy and hold strategy.  It has worked well for them. Now in their 60's, they collect Social Security which covers a big part of their expenses.

Paul reports that they live comfortably in $450-a-month rental in Chiang Mai, Thailand, one of the seven best places to retire around the world, according to the new Retire Overseas Index.

For the past 30 years, they’ve lived as perpetual travelers spending less than $100 a day. They’ve visited 80 countries from Argentina to Australia — mostly South America, Europe and Southeast Asia — with stops in between to visit family in the US.

The couple is “homeless” but not in the destitute sense.  They may live from 90 days to a year in a place and then move on.  Often, foreign visa restrictions limit a stay to one year.

What do they do for healthcare?  They pay out-of-pocket.  Since health care costs so much less than in the US, this is doable.  (My wife lived in France for a year and that is what she did). They retain Medicare coverage in the US and can travel back if needed for anything major.  However, should they have an emergency, they are on their own.

Doug Brown and Lisa Zandt sold everything and live on their sailboat.  “Living on a boat outside of the U.S. was much less expensive than living in the U.S.,” says Doug.  After a decade, they have returned to the US to live on land.  For income, they purchased a franchise.

Some jobs that have modest salaries but make up for it with lucrative pensions.  “The unique thing about the military is that you can start collecting your pension once you hit 20 years of service,” says retired commander Robert Chambers.  You don't need to have a high rank or authority.  Even a soldier can receive a decent pension making early retirement possible.

To be able to retire at 49, Chambers started collecting his military pension (after 24 years in the military) and took advantage of the health benefits available for military retirees. Mrs. Chambers continues to work and earns a modest salary. The bulk of their living expenses comes from his pension and his wife’s income, but they save a large portion of her $40,000 salary.

Other personnel with pensions that could be up to 100% of salary are teaching and working for a government (federal, state or local).  To receive 100% of salary and enjoy an early retirement typically requires that you work for at least 30 or 35 years.  If you start working at age 20, you could retire at 50 or 55.  Note that as Commander Chambers did above, he retired after 24 years and would not receive 100% of salary.

Given the cost to raise children, it’s no wonder that childless people can retire earlier.

And it would seem that two salaries earned by a couple would make it easier to save more and retire early, the reality is counter-intuitive.  Given that money is one of the most contentious issues in marriage, couples can have disagreements about a financial objective.  One may be a saver and the other a spender.  Different styles of handling money make it impossible to have the singular financial goal of early retirement.

But most importantly—no spouse and no kids were the main contributors to his early retirement.   Once he reaches his 60's, he has deferred compensation payment that will begin plus Social Security. He is also debt free as he paid of his condo prior to retirement.

Early Retirees—Strategies They Have in Common

I have omitted cases of early retirement made possible by: 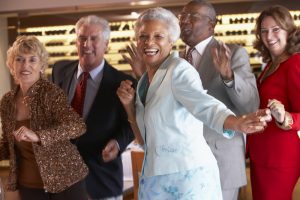 What do “ordinary folks” who enjoy early retirement have in common? What is their advice?

They live frugally.  It’s not that they sacrifice or do without; they are not happier by buying stuff and spending more.   They would rather cook at home than est out, they would rather take the family camping than to Disney World, and they would rather watch a movie on Netflix than pay for expensive movie tickets and overpriced popcorn.

Here are other preferences of early retirees.  If foregoing these items would cause you emotional distress, these are signs you are not ready to develop an early retirement mindset:

None of our stories of early retirees include needing supplemental retirement income. If you need to earn money and could otherwise retire, any person of any skill has alternatives.

I have a friend who has no skills and makes a respectable cash income by sharing her home – with dogs!  She dog-sits and earns $45/day per dog. She may have 2-3 dogs at a time.  While it is not much income, it is a sufficient supplement to her social security that she lives comfortably.

Ways to make a part-time income and retire when you want are limited only by your skill set and creativity. Possibilities for early retirement are more abundant than ever.